First of all, props to Let’s Go To The Movies for hosting this blogathon. If you like movies then I’m sure you’ll find something to enjoy on her blog, so go check it out!

I got into this blogathon a bit late, so unfortunately I just didn’t have time to watch all of the movies on my list again. Fortunately, I watched many of these so many times as a kid (some I still watch quite a bit) that I remember them pretty damn well. I had some difficulty narrowing down my list, so instead of writing a top 5, I decided I would make it a top 10. There isn’t one thing that ties all of my picks together (other than liking them as a child), I chose each them for various reasons. So let’s get to it, in no particular order, here are the top 10 movies from my childhood:

Way to start things off on a high note, am I right? For some reason, I really liked this movie as a kid. It was Batman after all and Mr. Freeze was one of my favorite villains. I own this movie on VHS and I still have a Mr. Freeze action figure somewhere. It was so colorful and flashy and Batman, how could a kid not like this movie? I haven’t seen it in a long time though, mainly by choice.

What do I think of it now?: All I can think of are bat nipples, bat credit cards, and bad ice puns. There are just so many things wrong with it. George Clooney is a good actor, but a terrible Batman. While I do still enjoy watching this movie on rare occasion, it’s really more painful than funny. I do kinda like the ice puns though, they’re just so fun to quote!

Now we’re talking, a classic from my VHS archive! Jim Carrey really started to take off in 1994 and he quickly became (and still is) one of my favorite comedic actors. This is a movie about two idiots that get roped up in a big criminal affair. This movie is ridiculous and childish and I loved every minute of it growing up. I mean the scene with Harry in the bathroom is just hilarious. I don’t remember exactly how old I was when I first watched it but I know I wasn’t really old enough to watch a movie like this (I was 5 years old in ’94).

What do I think of it now?: Dumb and Dumber is one of my all time favorite comedies. I still enjoy watching this movie and was pretty sad when it left Netflix streaming. I haven’t gotten to see the sequel yet, but even it’s not that good I’m sure I’ll still enjoy it even if it’s just for the nostalgia of seeing Jim Carrey and Jeff Daniels playing these characters again.

Listen, do you smell something? I was all about Ghostbusters when I was a kid. I was already a fan of the cartoon, I used to watch it all the time. The first time I saw the movie, it became one of my instant favorites (wherever my VHS copy is, I’m sure it’s pretty worn out). You name it, I had it: the toys, coloring books, I drank Ecto-Cooler, the whole shebang! Boy I miss Ecto-Cooler.

What do I think of it now?: I think my picture says it all. I would probably say that Ghostbusters is my favorite movie of all time. At some point I’m sure I’ll do a more in-depth post about it and talk about the upcoming reboot. 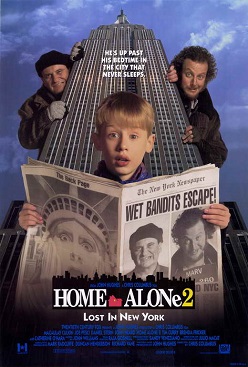 I’m not sure when I first saw these movies. I own both on VHS and I watched them way more times than I can count. Home Alone is the reason I know who Joe Pesci is. I included both of them because I watched them both quite a bit as a kid. I loved all the crazy traps and had a lot of fun every time I watched either of them.

What do I think of them now?: Sure they’re not the best John Hughes movies, but that’s not why I enjoy watching them (I’d watch Pretty In Pink if I wanted to watch a really good one). I still like the Home Alone movies because I have so much fun watching them. They’ve become holiday staples of mine and I watch them at least a couple of times every year. 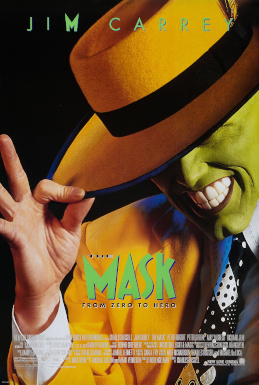 Oh hey, it’s Jim Carrey again! I think this is the movie that really introduced me to Jim Carrey, I know it came out before Dumb and Dumber. I really liked the green color of the mask itself (green is my favorite color) and I thought he was such a funny character. I loved to quote his catchphrases and I was even The Mask for Halloween one year. I had a couple of the toys and I liked the cartoon series, but not quite as much as the movie. The character just resonated with me and I loved to pretend to be him.

What do I think of it now?: It’s been a long time since I’ve sat down to watch this movie. I know I still enjoyed it the last time I watched it, but I honestly don’t remember when that was. I need to get a copy of it on Blu-ray at some point so I can watch it again.

Yet another classic. This is another movie that I have watched more times than I can remember. Robin Williams was the reason I was so drawn to this movie. Like Jim Carrey, I loved every movie I saw him in and he made me laugh so much. Also, him playing an elderly woman is just amazing.

What do I think of it now?: I still love this movie and always will. Robin Williams had a big influence on me growing up and his death hit me pretty hard. I was really looking forward to seeing Mrs. Doubtfire 2, just to see where they would’ve gone with it. I watch this movie any time I find it on TV and Robin Williams will always be one of my favorite comedians.

Put down your weapons angry mob, I have a pretty good reason for including this one on my list. I didn’t watch The Phantom Menace that much as a kid. In fact, when it came out I didn’t even like Star Wars. The commercials for this movie got me interested though. I really had to convince my mom to take me to see this movie because she knew I didn’t really like Star Wars. So yea, this movie is the one that opened me up to George Lucas’ space opera. After seeing it, I wanted to have lightsaber fights and be a Jedi. I even got a couple of toys afterwards (I believe I got Darth Maul and Qui-Gon Jinn figures).

What do I think of it now?: I’ll admit it, this is definitely NOT the best Star Wars movie. I will also admit that I don’t completely hate the prequel trilogy either. While the original trilogy is superior (Return of the Jedi FTW), I still enjoy watching The Phantom Menace even now and then. I need to watch through all six movies again before The Force Awakens comes out later this year.

My reason for including Robocop on my list is the scene above. I watched this movie on TV way before I was old enough to watch a movie this violent. The scene of the guy melting and then getting liquefied by a car is forever burned into my mind. It’s also how I remember which movie is which. I don’t remember Robocop 2 that well but when I think of the first one I think ‘oh yea, that’s the one where the guy gets liquefied!’

What do I think of it now?: I still like Robocop, it’s a great ’80s action movie. It’s probably my second favorite violent robot guy movie, the first being The Terminator. It’s another movie on my “must own on Blu-ray” list.

Space Jam was a thing that happened when I was a kid. I’ve never been that much of a sports fan, but I did like watching the Looney Tunes. I had a few of the toys from this movie too (wow, I was a merchandising executive’s best friend wasn’t I?). This movie appealed to me mainly because of the Looney Tunes and the toys. As a kid, I really did like this movie and saw nothing wrong with it.

What do I think of it now?: Oh my God this movie is a train wreck. It’s one big commercial to sell toys and sports merchandise (totally worked on me). These aren’t the Looney Tunes that I loved to watch and Micheal Jordan is not a good actor. This movie is just a big WTF to me.

And finally we make it to the end of my list. We may have started on a low note, but let’s end on a high one. I remember seeing Toy Story in the theater when I was kid (in fact, I’ve seen all three at the theater). This movie was so amazing, watching toys come to life just as I always pretended they did. I loved the characters and everything about it was just so much fun.

What do I think of it now?: In my opinion, Toy Story is one of the best animated films ever made. It was Pixar’s first theatrical release and boy was it a memorable one. It spawned not one, but TWO successful sequels (Toy Story 3 being released 15 years after the first!). The first two hold a 100% on Rotten Tomatoes and the third sits at 99%. Toy Story is definitely a movie that people of all ages can enjoy.

Well there you have it, the top 10 movies that I remember most from my childhood. I had a lot of fun writing my post for this blogathon and I hope you enjoyed my trip down memory lane. I definitely have to go watch a lot of these movies now. See ya next time!

6 thoughts on “The Top 10 Movies From My Childhood”

What’s in the void